The journey actually started years ago, long before Ryan and Veronica had even met …

Rewind to April 2001.  A single 20 year old Veronica felt God drop a few words in her heart.  She wrote them down on a piece of paper and chucked it in a drawer.  Every time she came across the piece of paper she would be tempted to throw it away as the words seemed utterly ridiculous, but for some strange reason she always tossed it back to keep.

Fast forward to October 2013.  At a 20 week prenatal appointment for their first child, Ryan and Veronica received devastating news – that their child had holoprosencephaly with severe microcephaly and considered “incompatible with life”. They were told they could terminate the pregnancy after some tests.

That day, Ryan and Veronica made a choice that would change their lives forever.  They refused the tests and chose to give their child the chance to live.  They also chose their son’s name – Matthew, meaning “gift from God” – having just confirmed the gender of their first child on that same day too.

And it was while traveling home that God reminded Veronica of that small piece of paper with an “utterly ridiculous” promise.  God had told Veronica years before that her firstborn would be a boy, and having just confirmed it that day, knowing the first part of the promise to be true, they believed that the second part would be true too:
HE WILL BE A MIRACLE! 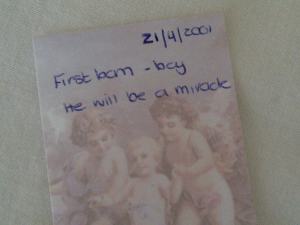 For the next 18 weeks, together with family and friends, they prayed, hoped and believed for that miracle …

Matthew Manuel Nel was born on 3 February 2014 via emergency c-section at 38 weeks with holoprosencephaly and severe microcephaly, cleft lip, flat nose with single nostril, closely set eyes and all the complications and complexities that go with such a diagnosis.

Current studies indicate that only about 3% of all fetuses with holoprosencephaly survive to delivery and the vast majority of these infants do not survive past the first six months of life.  Matthew turned 6 years old in February 2020!
MATTHEW IS A MIRACLE! 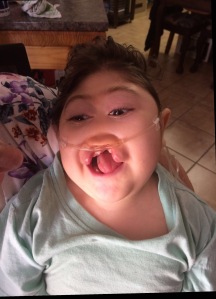 Miracles do happen.  Not always the miracles we pray for but the miracles we need.  Faith, hope and love hold this little family together as they try to live simply and slowly.

Their constant prayer is for the peace to accept the unchangeable, courage to change the changeable, and most importantly, the wisdom, discernment and insight to know the difference between what is changeable and what is not.

This blog is to share their journey in finding hope off the beaten track.